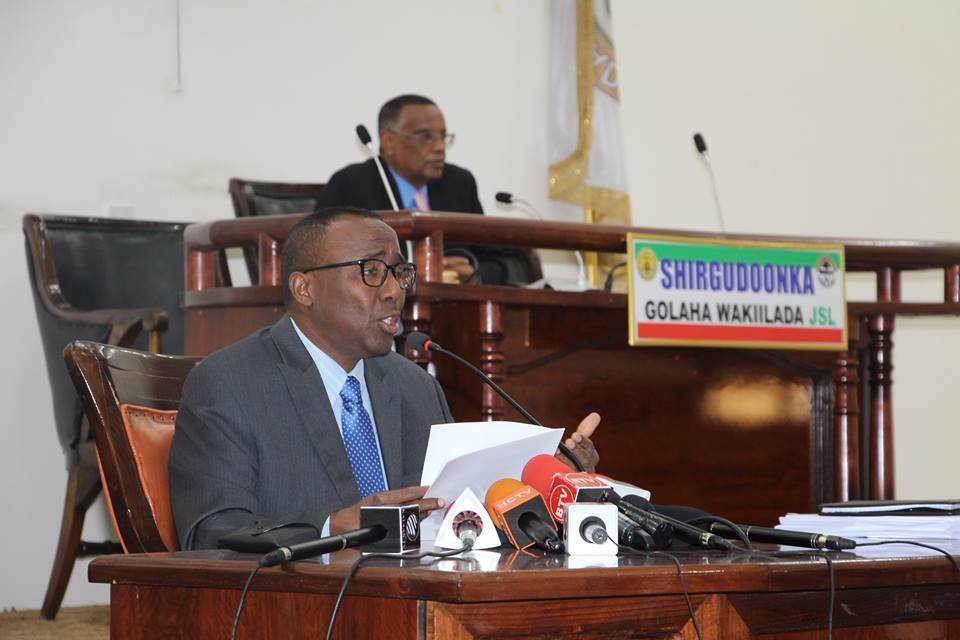 Hon Hussein Abdi Dualeh today forwarded to the legislature to make it into law the proposed package consists of a Petroleum Policy, an Upstream Petroleum Bill and a Petroleum Revenue Bill.

The translation of the bills into Somali and review which has already completed, were previously sent to the full Council of Ministers for debate and approved have now being forwarded to the legislature to make it into law.

Hon Hussein Abdi Dualeh, during his presentation to members of the house of representatives started by starting: –

Therefore due to the limited interest from international oil companies to come to Somaliland, the Somaliland government abandoned the bid round process for licensing blocks in favor of an open door policy to solicit and negotiate one-on-one with each oil company that is willing to come here. I understand that when the minister before me in the previous government put out an international bid round for some of the Somaliland blocks nobody came and there were zero bids received which was quite embarrassing

Once we find an interested company, we qualify their technical and financial capacity to farm-in into existing interest or enter into a new Production Sharing Agreement (PSA) with Somaliland by filling out a standard application and submits it to the Ministry of Energy & Minerals (MOEM). Once they qualify, we then enter into negotiations with them to hammer out an agreement. In ensuring that the government gets the best possible stake in these agreement, we hire reputable international oil & gas lawyers to support the government in these negotiations.

Once an agreement is reached with an oil company, the unapproved PSA for awarding new acreage goes to the full council of Minsters chaired by the President and Vice-President to be debated and ratified before the MOEM executes the agreement.  In line with our constitution, Somaliland uses an existing Petroleum Act that it inherited from the previous Somali government before the breakup until we draft our own which we are in the process of doing and will be discussed today.

This existing petroleum law vests the approval of such petroleum agreements to the executive branch of our government. But the legislature has the prerogative to summon the Minister of Energy & Minerals, as they often do, to answer any questions posed by them on any PSA agreement that is entered into by the executive branch.

The Ministry of Energy & Minerals has been working for over a year in developing a new upstream petroleum regulatory framework drafted with the help of a world class Norwegian law firm. The development and drafting of this new legal framework was presented in a workshop to Somaliland government key stakeholders this past June. The attorneys then finalized the package incorporating the workshop input in August. The new petroleum regulatory package has been under translation by a Somaliland law firm (Xaqdoon) and has been under review by the Government Solicitor General to ensure it does not conflict with existing Somaliland laws.

Once the translation and review is completed, the bills will be sent to the full Council of Ministers for debate then will be forwarded to the legislature to make it into law. The package consists of a Petroleum Policy, an Upstream Petroleum Bill and a Petroleum Revenue Bill. We are targeting to have the new law passed by the Legislature as early as possible in 2015.

The signature bonuses pertaining to awarding the above-noted blocks were paid to the Somaliland government. In order to ensure transparency and proper accountability, all funds paid by the oil companies to meet their obligations are sent to the Central Bank of Somaliland who verifies and clears the funds and ensures that they are deposited in proper government treasury accounts. The Ministry of Energy & Minerals have made it a practice to make the receipt of these funds public and the Ministry of Finance have attested to their receipt.

Demystifying the Much Misunderstood PSCs

Non-renewable natural resources are an important issue for every country.  Countries strive to get the most value for these resources and to exchange the right to develop them for meaningful contributions for the nation and its people.  We have done the same here.

Not everyone will be familiar with the structure of a typical “profit sharing contract” or “PSC” – it is an agreement unique and common to the hydrocarbon industry.  In a PSC, the investor, like IOCs in Somaliland such as Genel, DNO. RakGas & Ansan, funds all the costs and takes all the risk that it will to find hydrocarbons in commercial quantities.  Typically, the chances of making a commercial discovery are 5% to 10% – so there is a significant risk of investing a lot of money and coming away with nothing.

In Somaliland, it is difficult to estimate the chances of success because we are just developing a modern hydrocarbon industry and there is no scientific data to help us predict the existence and location of commercial quantities of hydrocarbons.  This means that our commercial terms must be more attractive than in countries that have significant proven hydrocarbon reserves – like Saudi Arabia and the UAE – Abu Dhabi.  There are other risks that influence the commercial terms that we can negotiate with investors, including political and legal risk.

Under a full economic analysis you would see that the investor does not make any profits until it recovers all its sunk costs, which takes years of consistent production.  The government gets both the royalty share and its profit oil share regardless of the profitability of the development and without having to invest or risk any money.  The investor takes the risks of finding enough hydrocarbons to cover its costs and the future market price of those hydrocarbons.

The terms of the PSC with the IOCs are confidential. If the government improperly discloses these terms, it will be in breach of contract.  These terms are kept confidential for many reasons, including protecting the government’s ability to negotiate competitive terms with other investors.  Without giving away any particular contract specifics, I can confirm that the new PSC that we signed generally include the following elements, all of which are collectively referred to as the “government take” in the industry:

Under the leadership of President Ahmed Mohamed Silanyo, Somaliland is closer than it has ever been in its history to exploit its natural resources for the benefit of its people in a fiscally and environmentally responsible way. In envisioning to develop new modern regulatory framework to guide the sector before anything gets out of the ground, we have assured the Somaliland people that our resources once exploited will be properly managed to avoid the preverbal “resource curse”.

If Somaliland is to become a stable prosperous country in the Horn of Africa that collaborates with the international community to contribute to the peace and stability of the region, I urge the international community to support Somaliland in its peaceful effort to exploit its natural resources for the benefit of its citizens who deserve to aspire for a better standard of living and improved economic conditions.

Likewise, I urge our Somaliland citizens to support this Ministry and the government in its efforts to develop our natural resources that God endowed us with for the common good. We urge our citizens to be patient in realizing our dream as a nation to become a country that benefits economically from its natural resources and not one that keeps it in the ground while we starve on top of it or squanders it when it gets exploited.

The level of government take and revenues that can be obtained should be competitive with other available international opportunities.  At the same time, the economic terms should encourage investors to achieve the highest efficient rate of production.

As implied here, risk and reward must be in balance – the lower the technical and other risks in the host country, the higher the government take can be.  For example, you would expect that the government of Abu Dhabi will get a very large government take in the bids for their giant discovered onshore fields.

The Much talked about “Resource Curse”

The extractive industry critics are quick to point out that oil resources exploitation often result in environmental disasters and few insiders lining up their pockets on the riches gained from oil production. Although there has been cases of gross resource mismanagement, that is not necessarily the rule but the exception. You have shining examples such Norway which has managed its resources in a fiscally and environmentally responsible way. They have now accumulated nearly $900B sovereign wealth fund for their future generations, which has surpassed that of Abu Dhabi.

African countries such as Ghana are getting better in managing their resources as well and following the Norwegian example. I was recently in the DRC, a post conflict country of immense natural resources who has been looted in the past by everyone. But with improved peace and stability are now getting better handle in managing their resources and have even passed the EITI clearance. By the way we are also aspiring to one day get such clearance with the passage of new regulatory frameworks and improved best practices.

On the other end there is the example of the past misdeeds of the oil industry such as what happened in the Niger Delta. Oil companies can no longer afford to work with governments with corruptive practices or commit environmental disasters. It is bad for their bottom line. It can bankrupt them because of the potential huge liabilities that can result from such offenses. BP almost got bankrupt because of the US Gulf Coast incident. We have included in all our PSCs anti-bribery clauses for the oil and mining companies to abide by, that could result in terminating their contract if found in violation.

Before we get anything out of the ground in Somaliland, we want to emulate the successes of countries that managed their resources well and avoid the mistakes that others have made in exploiting their resources. That is why we hired a Norwegian law firm to draft our Petroleum legal framework to set a sound foundation to our resource management practices. We want to chart the path of implementing best practices.

More often the not, countries that exploited their natural resources have seen their economies grow, new modern infrastructure built and poverty alleviated. We want to chart the path of prudent management of our natural resources to bring about a positive impact on the lives of our people and our economy.

We don’t feel that oil exploitation will bring about conflict in the region, but believe the opposite. It will bring about more stability to Somaliland by growing the economy and alleviating poverty.